A Blog from Your Kaiser Permanente Pediatricians in Northern California 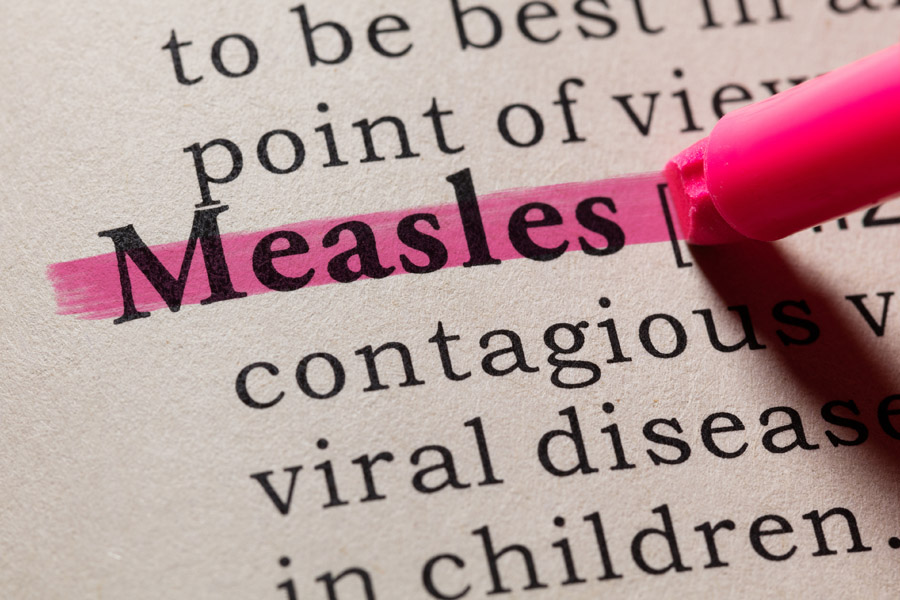 What Parents Need to Know About Measles

I was talking with my mom the other night about measles. When she was young, it was a common childhood illness. I asked if it seemed scary. “Well, yes,” she said. “Kids died from it – and there was nothing a mother could do to protect them.” She was exactly right.

Measles, a viral illness thought to be eliminated in the U.S. in 2000, is flaring up again with outbreaks in several states. New measles infections can be traced back to travelers (Americans or foreign visitors) returning to the U.S. from areas with outbreaks.

It’s so contagious that if one person has it, 9 out of 10 unprotected people close to them will also become infected.

Measles puts anyone not protected at risk. But this time there’s something we can do to protect our children. We can vaccinate them. The measles vaccine was introduced in 1963.

To understand why measles is so scary, let’s look at the numbers:

Symptoms usually begin 7 to 14 days after exposure. These include:

Three to 5 days after early symptoms appear, late stage symptoms will appear, including:

An infected person is contagious from 4 days before to 4 days after the rash appears, and should be isolated at home during this time.

If you or your child has symptoms of measles, call your doctor. It’s important to call before you come in so we can check your child’s immunization status and decide if an office visit is needed. If so, your doctor’s office will make special arrangements to evaluate your child without putting other patients and medical staff at risk.

There’s no treatment or cure for measles once you get it. Most people feel better within 2 weeks after symptoms first begin.

But complications from measles can be severe and include pneumonia, brain swelling (encephalitis), and permanent deafness. Measles can even be deadly.

So prevention is the key. The vaccine is safe and very effective – 2 doses provide life-long immunity for 98 percent of vaccinated people. The vaccine is given in 2 doses:

If your family is traveling abroad or to an area with an active outbreak, the vaccine recommendations are a little different:

Until the age of 6 months, a baby is protected in large part by immunity passed on from their mother in utero (if the mother was vaccinated or previously had measles). Then, as that immunity decreases, the vaccine is most effective if it’s given at 12 months of age.

Decades of research into measles has produced clear facts about measles. But there’s one number for parents to focus on for reassurance and guidance: the number 2. Two doses of vaccine will protect your child.

The Centers for Disease Control and Prevention:
Measles

Kate Land, MD is a pediatrician at Kaiser Permanente’s Vacaville Medical Center. She believes that, as parents, we each must find what works best for our families — without guilt or judgment of ourselves or others. Dr. Land believes that her three children have taught her about life’s joys and struggles. She has stated that as a mother and pediatrician blogger, “I want to share some of these lessons with other parents. There are many ways to raise children well and we can all learn from each other and enjoy the path together.” Dr. Land’s full biography can be found on My Doctor Online.

Disclaimer: If you have an emergency medical condition, call 911 or go to the nearest hospital. An emergency medical condition is any of the following: (1) a medical condition that manifests itself by acute symptoms of sufficient severity (including severe pain) such that you could reasonably expect the absence of immediate medical attention to result in serious jeopardy to your health or body functions or organs; (2) active labor when there isn't enough time for safe transfer to a Plan hospital (or designated hospital) before delivery, or if transfer poses a threat to your (or your unborn child's) health and safety, or (3) a mental disorder that manifests itself by acute symptoms of sufficient severity such that either you are an immediate danger to yourself or others, or you are not immediately able to provide for, or use, food, shelter, or clothing, due to the mental disorder. This information is not intended to diagnose health problems or to take the place of specific medical advice or care you receive from your physician or other health care professional. If you have persistent health problems, or if you have additional questions, please consult with your doctor. If you have questions or need more information about your medication, please speak to your pharmacist. Kaiser Permanente does not endorse the medications or products mentioned. Any trade names listed are for easy identification only.

Stay connected with your Kaiser Permanente doctors in Northern California, search for health information, manage your appointments and more.