A Blog From Your Kaiser Permanente Physicians 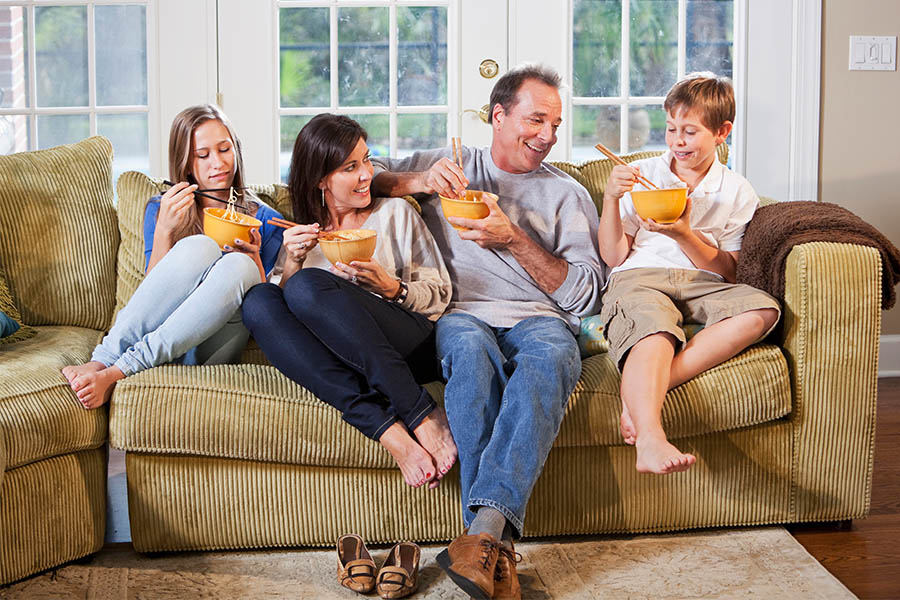 TV Dinners and Coloring Outside the Parenting Lines

As we stood at my kitchen counter, my friend said, “You ought to write about it. Makes you seem human, you know?”

So, in the spirit of self-disclosure inspired by articles I read recently by parents who admitted their shortcomings, I’m doing the same. One father wrote about missing too many dinners with his family. A fellow pediatrician wrote about what happened when her daughter went to bed with an iPad.

Here’s my confession: Sometimes my kids and I eat dinner in front of the TV.

When I was a kid, I watched very little TV (for many years my mother and I didn’t even have a TV) except when I enjoyed summers with my grandparents. After spending the days outside in the woods or along the river, I was allowed to watch TV at night. My grandmother was a well-educated, cultured Southern woman who believed in table manners and personal style (I spent a lot of time walking around with a book on my head for her).

So, in retrospect, it surprises me that during those summer vacations we ate nearly every evening in front of the television. We ate our dinner on china, with silver, but – while watching TV. We watched old stuff like Hogan’s Heroes, M*A*S*H, Hee Haw (seriously), The MacNeil/Lehrer Report, Lawrence Welk (they were my grandparents after all!), and The Mary Tyler Moore Show.

Was this wasted time? Were dinners without conversation a loss? I think perhaps not. Instead I remember that what we watched united us through shared references. We had plenty to talk about after the shows were over.

So maybe my friend was right when she told me to stop worrying. The occasional dinner in front of the television without attention to table manners and conversation won’t damage the kids.

As a pediatrician and a member of the American Academy of Pediatrics Council on Communications and Media, I’m passionate about helping parents navigate their family’s use of media in a healthy way. I recommend sitting around a table and talking with your kids for a meal every day. I support the AAP’s recommendations that we turn off screens as much as possible – especially at the dinner table. Dinners eaten together as a family are important to me. Conversation is a priority.

However, parenting is a messy business, and we’re indeed human. Parents need to forgive themselves when they don’t always follow the rules and advice given to them – when they sometimes miss meals, give kids iPads, or eat dinner in front of a screen. Having the TV on isn’t ideal, but perhaps my kids will benefit from my bending the rules occasionally – and not being too hard on myself if I’m not parenting perfectly.

After the show is over, my kids and I usually have some incredible conversations about what we watched. How I Met Your Mother certainly provides loads of teachable moments!

This article was previously published on July 7, 2018

Kate Land, MD is a pediatrician at Kaiser Permanente’s Vacaville Medical Center. She believes that, as parents, we each must find what works best for our families — without guilt or judgment of ourselves or others. Dr. Land believes that her three children have taught her about life’s joys and struggles. She has stated that as a mother and pediatrician blogger, “I want to share some of these lessons with other parents. There are many ways to raise children well and we can all learn from each other and enjoy the path together.” Dr. Land’s full biography can be found on My Doctor Online.

Disclaimer: If you have an emergency medical condition, call 911 or go to the nearest hospital. An emergency medical condition is any of the following: (1) a medical condition that manifests itself by acute symptoms of sufficient severity (including severe pain) such that you could reasonably expect the absence of immediate medical attention to result in serious jeopardy to your health or body functions or organs; (2) active labor when there isn't enough time for safe transfer to a Plan hospital (or designated hospital) before delivery, or if transfer poses a threat to your (or your unborn child's) health and safety, or (3) a mental disorder that manifests itself by acute symptoms of sufficient severity such that either you are an immediate danger to yourself or others, or you are not immediately able to provide for, or use, food, shelter, or clothing, due to the mental disorder. This information is not intended to diagnose health problems or to take the place of specific medical advice or care you receive from your physician or other health care professional. If you have persistent health problems, or if you have additional questions, please consult with your doctor. If you have questions or need more information about your medication, please speak to your pharmacist. Kaiser Permanente does not endorse the medications or products mentioned. Any trade names listed are for easy identification only.

Stay connected with your Kaiser Permanente doctors in Northern California, search for health information, manage your appointments and more.